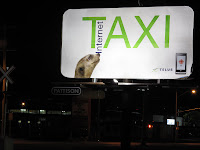 The worst part about the recession isn't the cash flow. It's the lack of good stories. Now that no one goes out nothing interesting is happening. At least not on a regular basis. Things are slow as fuck. The one topic that comes up is the new shield. Some people like it. They think I'm safer. I don't feel any safer. My only real danger I think is drunk drivers and the law isn't stopping them. It's cut throat out there. I've been in several fights over placement in a line up at a club. Tonight some fuck said that he was in line waiting to park where I was parked. He pointed to where he was parked and said "What's going on, this is my spot." I looked over to where he was pointing and said ' you were parked in front of another club, that's not the line, I'm sorry buddy but I ain't movin." He drove away angry. Then double parked in front of another taxi. Anger is everywhere. Money seems to be in the hands of the rich. I don't trust money or people with it. I cater to them, but people with lots of money seem crooked . Bad. Sorry bout no post last night, I went to the Rise against concert which was out of this world because I actually really went to see Rancid. Fucking Punks, they should stay in California where it's warm. I'm joking back off.
Posted by Bum Atom at 4:07 AM

maybe the fact that it's so dead right now is the universe is trying to tell you something...

Dude was Rise Against good?
I had luxury seats there but...had to leave after Rancid. too much weed.

omg why are you going to ANY hard rock or punk rock concert if you don't like the smell of pot. what do you expect?