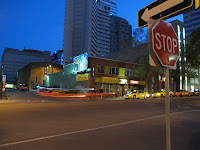 The cage makes me feel more alone. The protection achieved by the plastic shield damages the communication. Really the shield tries to deny "talk". The transaction is forced to focus on Location and cost,"Taxi." I can't hear what's happening back there. People sit in front. I don't mind that. I like it. I always did. Tonight I was waiting for the light on 156st south bound to turn green. I wanted to turn west onto Stony Plain Rd. This thug. Tweaked out. Skin, bones and bling wanted in. I told him I wasn't giving him a ride. It's slow. I realized that I could have thrown him in the back. Sealed him up in that box. No go. There was this guy, I picked em up next to New City. He asked "can you take me to the west end?" "Damn right! Get in" I said while waving him into the front seat. This was a normal dude. We talked about his shitty night. He was sad. His girlfriend ditched him with his cousin. The two took of to whore around for drugs. He was stuck getting home. Half way there he looked up and said "I only got 8$." The fare was running at around 14$ at the time. I laughed and said "don't worry you'll get home." I was happy he told me the truth. I gave him the URL to the blog, The fucking blog. Lots of drunks hitting the streets. Driving, biking, skatin DRUNK. Even though its really cold, good on you people. I drove this woman she just dropped a dude off. She was a designated driver. She was a professional. Wanna Go Home With Us , sounds dirty right?
Posted by Bum Atom at 4:53 AM

What a nice guy! You definitely got Karma points for not kicking the dude out!

You should slide a visa when they get in!!! Like at the gas pump. This is overall in general BS for you.

hmm, that partition new? yeah there is no doubt that it isn't just a coincidence that the cab drivers in new york started getting a bad reputation for not talking anymore at the same time the partitions were made mandatory. now they are optional in general but mandatory at garages.

Unfortunately it really is a key deterrent to robberies and violence. but it does kill the joy of the job by about 60% is my guess. Never had no partition, that must've been cool.

wait until a few years passes, and your plexiglass is gonna get all scratched up. At first you may get real freaked as the reflection of lights bounce in all sorts of unnatural directions, but eventually you learn to keep a more narrow vision, less sight less talk, but hey, at least you have some security. If a passenger gets rough and they're sitting in the back, you can jam on the brakes and the gas, and have them bounce all over the rear.

Hey Jacob thanks for the ride brother. hope you don't run into many fares like me!! HAHA Tyrone