Pump It up we are going to Mars 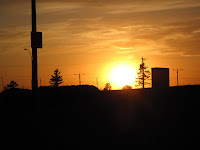 Patience? Tonight I was trying to discipline myself. It's slow right so you got to pick your club and sit there. I did I waited. At the Funky Booda. I was the first in line, I just sat there for a long time. Over an hour I think. I've never done that. Sat in front of a club forever. Patience is not really my thing, but I was trying to be diligent. I knew I was going to get a fare. When it finally happened the couple told me that they were just going up the street. I told them how long I was waiting. They both knew they saw me while out on their smoke breaks. They ended up going down town and tipping me ten bucks. The trip was worth it but I was expecting a bigger pay-out out of the trip due to the patience factor. Not a financial pay out an inspirational one. They were a couple in the grips of lust and passion. They were on their way to have sex. Whatever. Right as I was leaving their parking lot I got a call. The first call of the night. 112ave east side of 75st. North side. The woman gets in. Drunk. "Where we going?" I ask. She looks at me and says "the river, by those stairs." Then I asked with a confused look on my face "the river? Downtown? Where?" I could tell by the way she was looking at me this was going to be a strange ride. She was wearing a shirt, you could clearly see through. " Got money?" I asked." "I'll pay you tomorrow" she told me. I asked her where she was going. She said "lets fuck" then she got real close to me with her chest. She tried caressing my chest but got a fist full of the G10. The lady was all over me, I said "I'm not going to be with you." "DO you have a wife?" she asked I said "yes." She said " I won't tell." This was pretty intense. All I could think about was that wait outside the Funky Booda. Patience. This woman was pure evil instinct sex cumming at me like a title wave. Scary what goes through a guys head. She used the dirtiest words she was bad news. I told her "get out, I can't do that." She reluctantly stepped out of the taxi. "Come over when you're ready, I got weed and beer." That woman tried to seduce me. Why? I have no idea. The way she wanted to go to the river. What the fuck did that mean? Patience. Was it worth it? I learned a lesson tonight. Sometimes when you listen to that little voice in the back of your head. The one that says "be patient wait" even though that other voice is screaming " GET THE FUCK OUT OF HERE." You wait and wait until you get your fare share. If you really listen to that little voice that voice that almost doesn't exist you get more then your fare share. You are given the ability watch that instinct that animal in you and everyone else. It's a lion. If you really are patient enough to listen to that voice then when the demon throws itself at you you know what to do. I felt tested last night. I followed that voice around and it threw me to the wolves. I dealt with it. I passed the test.
Posted by Bum Atom at 3:28 AM

Ugh well good to know even women can be sleaze bags, sorry you had to deal with that crap. Sounds like it was a real test for your character which you passed with flying colors.

Here I thought I was the only one who was harassed by strangers
You need to carry a gun. In fact...we all do.

I like your writing style. I felt like I was there in your shoes for a minute. Glad you passed the test.